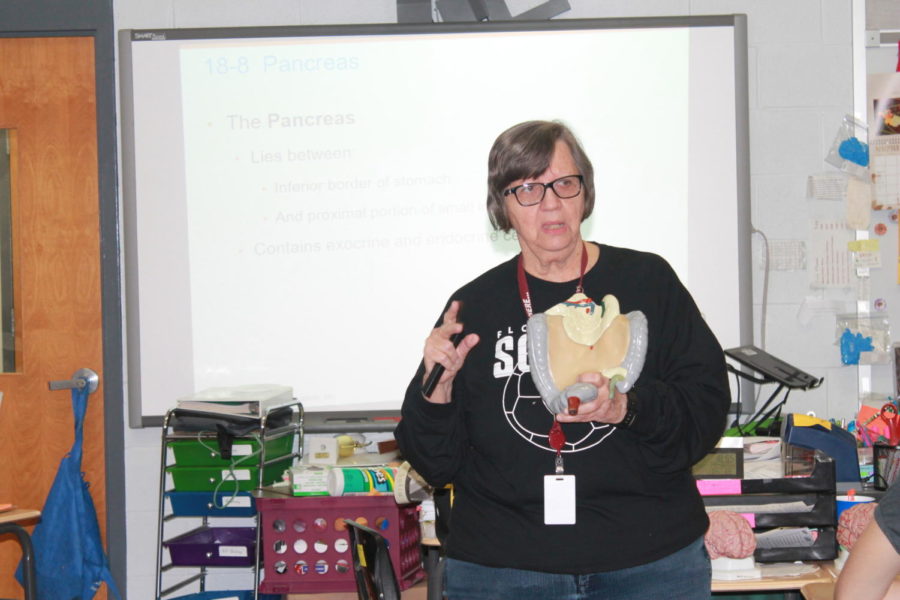 Science teacher Beth Huckabee has been teaching for over 40 years at the high school.

Science teacher Beth Huckabee expected to retire from teaching 35 years into her career, but now 48 years later, she continues to educate and inspire her students.

Huckabee recently reached her 40th year teaching at the Bluff. Throughout the years, the experienced educator has witnessed drastic changes in dress code, technology, and the education system.

When Huckabee first started teaching, female teachers were not allowed to wear pants.

According to Huckabee, for classes like anatomy and physiology and biology, which she teaches, jeans are a much more practical dress choice.

With changes in dress code, there has also been a multitude of technological advancements in the past 50 years.

“Bringing computers to the school district has added to the workload of teachers tremendously because what used to have to be done in meetings with trainers and administrators we now have to do on our own,” Huckabee said.

Huckabee also described how the widespread use of cell phones has isolated students in the classroom.

Along with facing many changes, Huckabee admitted she has dealt with multiple challenges in her career.

“The first six weeks of teaching I went home and cried every day,” Huckabee said.

Though she faced a challenging seventh-period class, Huckabee prevailed. And once her seventh-period changed from a class of 40 to a class of 20 in the second six weeks, she had a much easier time controlling her otherwise rowdy class.

Alongside some difficult times, Huckabee recollected on some interesting experiences in her 48 years as an educator.

“My first day of teaching, everything had gone smoothly until then, I’m getting ready to start teaching, and half of my class just got up and left the room,” Huckabee said.. “I’m sitting there looking around like,‘What did I say? What did I do wrong?’”

Huckabee sat in amazement as she looked at her three remaining students.

Reaching her 48th year teaching, Huckabee has learned how to manage teenagers and has found ways to get herself ready for a new day.

“Tomorrow is always a new day, no matter how bad yesterday was, especially when you are dealing with teenagers,” she said. “Sometimes they have really bad days.”
One of Huckabee’s favorite things about teaching is the fact that each day is a different story.

“When you teach science, you continue learning and I think that satisfies the schoolgirl in me,” she explained.

Huckabee is the campus Challenge team coach. In Challenge, student’s answer trivia questions, much like the TV show “Jeopardy,” and compete against other Corpus Christi-area students on public television.

“She has this tradition where she chews gum, the big red gum, to keep her mouth busy because you’re not allowed to confer with players,” Elizalde, a junior, said. “She uses it to keep her mouth shut, because she knows everything.”

A fellow student and Challenge team member, Andres Sens, a junior, agrees that Huckabee knows a lot from her previous experience and admitted to noticing Huckabee’s hunger for knowledge.

“There are sometimes in AP bio where she would be like ‘huh, I didn’t know that,’ ” Sens said. “There was one time when we were watching a video about mushrooms that she had never seen before, and she was so fascinated about mushrooms.”

Huckabee’s years of experience have not gone unnoticed. In 2010, she won the secondary teacher of the year in the state of Texas. This title sent her places as close as El Paso and as far as China.

Huckabee has a piece of advice for other teachers.
“For my fellow teachers, remember that things get better, and stay positive,” she said.