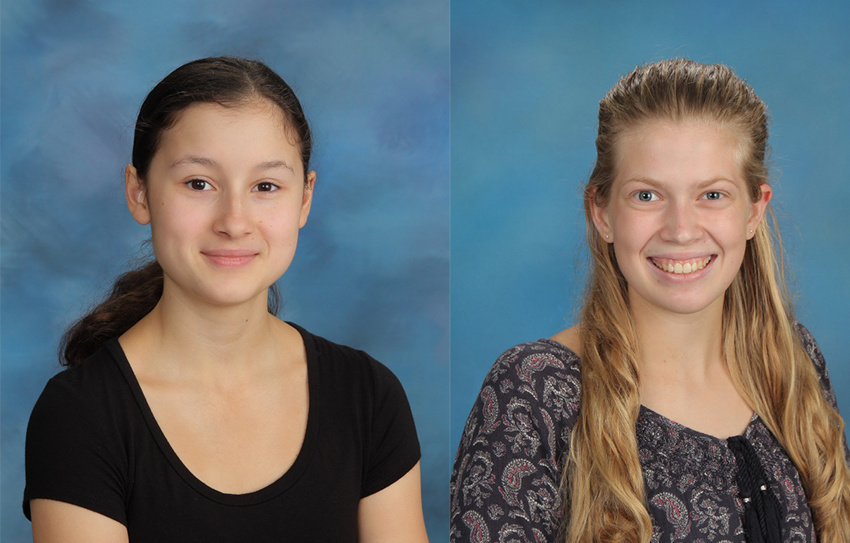 Speaking to the top two highest ranked scholars in the school, you probably wouldn’t expect them to be as humble as they are.

When Lora Seehusen found out her place as Valedictorian, it was far from something she expected.

“I thought I probably was going to be top 10, but like the lower half of top 10,” Seehusen said.

This doubt seems to be a common occurrence between students, as Tatiana Ortiz was just as surprised when she saw her place as Salutatorian.

Ortiz recalled that she was extremely nervous to check her rank, and wasn’t sure if she would have even been ranked within the top 20.

Seehusen said that most students knew her rank before she did, and she had multiple people come up to her and ask her if she was the valedictorian.

“I had these friends who wanted to be valedictorian, and I always said that I didn’t care and was just going to do my best,” Seehusen said. “But then freshman year rolls around and after the first semester we go to check our class rankings and I thought, wait a minute, what? That can’t be right.”

Seehusen, President of Mu Alpha Theta and also a member of Varsity basketball, Choir and National Honor Society has trouble balancing her responsibilities. Like a lot of teens, sometimes she gets so overwhelmed she feels unmotivated to do anything.

Seehusen recalled an experience from the previous night in which she was particularly uninterested in doing her work.

“I didn’t really have a lot of homework, but for the homework that I did have I said, you know what, I’m not doing this,” Seehusen said. “I watched a movie instead.”

Seehusen claimed that she definitely feels pressured and overworked all the time, but she often manages to get most of her work done in class. She said studying for tests takes up most of her free time.

“She’s the kind of person that you know if she wants it, shes gonna do the work and then be sure that she goes out there and gets it,” Bacy said.

Tatiana Ortiz also has a difficult time with balancing school life and daily life outside of academics.

“I feel very pressured a lot of times but, I’ve kinda learned how to balance that through things that I do to help relax,” Ortiz said. “I’ve always been a bit of a stress muffin, so for me it’s always been a balance of work and then, okay, time to rest.”

Ortiz finds different ways to balance her school life and daily life, such as working out and spending her friday nights by eating, relaxing, and finding other ways to enjoy herself.

“Practice makes perfect. I know that sounds like a really neutral quote but honestly it’s true, It really does,” she said. “I’ve really struggled with subjects in the past, but practice does make perfect so, try, try again.”