‘Murder’s in the Heir’ underway 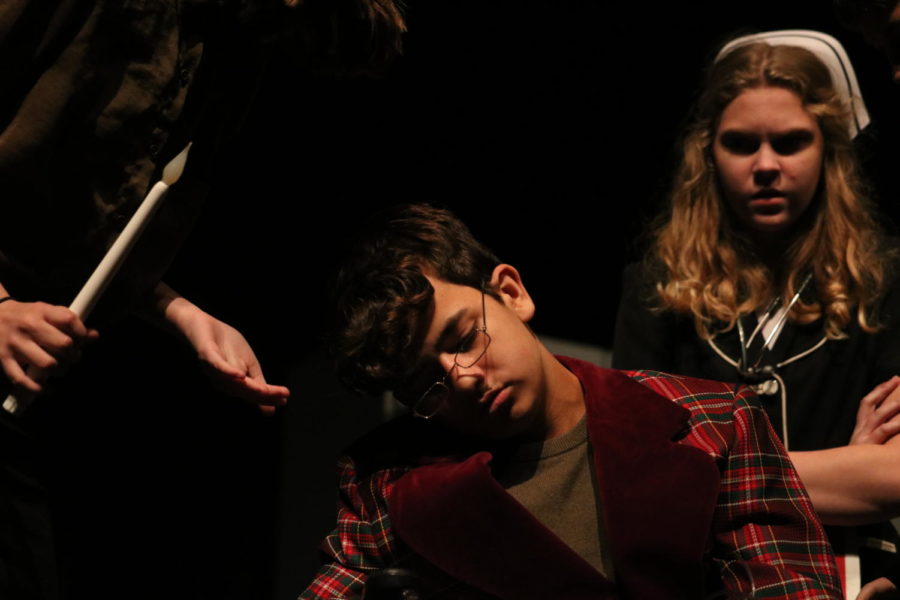 Having just been murdered, freshman Landon Alaniz, playing Simon Starkweather, shocks sophomore Beau Borgmeyer, portraying Miss Withers, during the dress rehearsal for the play "Murder's in the Heir" on Nov. 26 in the school auditorium.

The theater students have put together a new show called “Murder’s in the Heir”. The show is a murder mystery-comedy where the audience gets to vote on who they think the murderer is at intermission.

Somebody has murdered Simon Starkweather, and almost every character is potentially a suspect.

The play will be double-cast. The first performances were on Nov. 30 and Dec. 1. Theater fans have another chance to see the show on Dec. 7 and 8. The show will start at 7 p.m., and admission is $5.

The students were in rehearsals for 10 weeks doing physical and vocal warm ups, team-building exercises and some ensemble building theater games.

“I want the kids to have a great experience, push themselves as actors and technicians, build friendships and share their love of theater with the audience,” theater teacher Erin Samuels said.

For the past month the casts of “Murder’s In The Heir” have been practicing and memorizing their lines. However, the casts have not had much rehearsal time because of the auditorium being fully booked up.

Like any other performance there were  obstacles that had to be ironed out.

There are over 31 people in the play; the murder cast has 16 people, and the heir cast has 15.

For the heir cast there’s two understudies who will be playing on both show nights.

“I think there may be some challenges with limited rehearsal time, learning my style of directing and having so much ground to cover in such a short time with the double-cast,” Samuels said.

Sophomore Helena Simmons plays Fiona Starkweather. Her character is a little bit of an airhead, so she’s having fun trying to portray that.

“I’m most nervous about balancing schoolwork and the play; however, I’m excited to perform onstage,” Simmons said.

Junior Hailey Born is playing the part of Paula Thompson, who is the southern belle character. She is pretty excited to see who the audiences picks to be the murderer.

Born said she is mostly nervous about the double casting.

“I hope that on the show day, both casts are prepared and are able to put on the best performance we can,” Born said.

Born also finds it tough juggling homework and rehearsals since she’s in all pre-ap classes. She manages to get everything done, but by the end of the week she’s exhausted, she said.

She said she thinks the audience will like that they have control over the ending: who’s the killer. She said it’s very clue-ish and the audience gets to play detective.

“Of course there’s lots of humor and fun characters to watch and interact with onstage,” Born said.